A true taste of the caribbean

OPEN FOR Indoor dining, Drive Thru & Take Out

It's not just fast food, it's GOOD food.

This vision for Bamboo Walk was given to Paula in May of 2020, shortly after the start of the pandemic by a direct word from God. Paula was visiting Florida at the time, and was participating in a 21 day spiritual fast. God spoke to her not only about creating this ideal place, but He also told her exactly where it should be located -  1343 Utica Avenue in Brooklyn NY.

Paula mercure
It is no surprise that a vision like this would be given to Paula. She's no stranger to good food, having grown up with a mother that was (and still is) an excellent cook, with an undeniable talent for creating and developing flavors in the kitchen that are unmatched. Today, her mother Lorna Taylor stands in the kitchen alongside Executive Chef Dexter Royes, an internationally trained food genius.

Bamboo Walk is often described as a Caribbean restaurant with excellent food, great drinks and a brilliantly designed ambiance. Some may also describe it as a diamond in the rough, but all agree that Bamboo Walk is top-tier when it comes to customer service. What makes it most unique is the cuisine - the blending of two cultures people never thought could come together - a Jamaican and Haitian combination that both intrigues and delights all who visit.

These cultures come together not only in business and flavors, but in marital bliss as well, since Jamaican-born Paula is supported in this venture by her husband Pierre Mercure who was born and raised on the island of Haiti. Proudly, the Haitian coalition did not stop there. Other major investors in Bamboo Walk are Sherlie Valentin, Guy Pierre Toussaint and Wilder Guirrer.

Today we celebrate not only what Bamboo Walk sells but what it represents. For so long, and even today, women have experienced inequality in economic opportunities, educational inequities, and so much more. Today, however, we are witnessing what has been created by a woman, and a woman of color no less, all while holding down a career, being a wife, and being a mother to 3 children.

Bamboo Walk became a reality because a group of Black immigrants and college educated professionals came together with their resources and decided to build. We believed it was possible not only because we have faith in ourselves, but also because God told us it was possible! Thank you to everyone for your love and support over these past 365 days - it is so greatly appreciated! 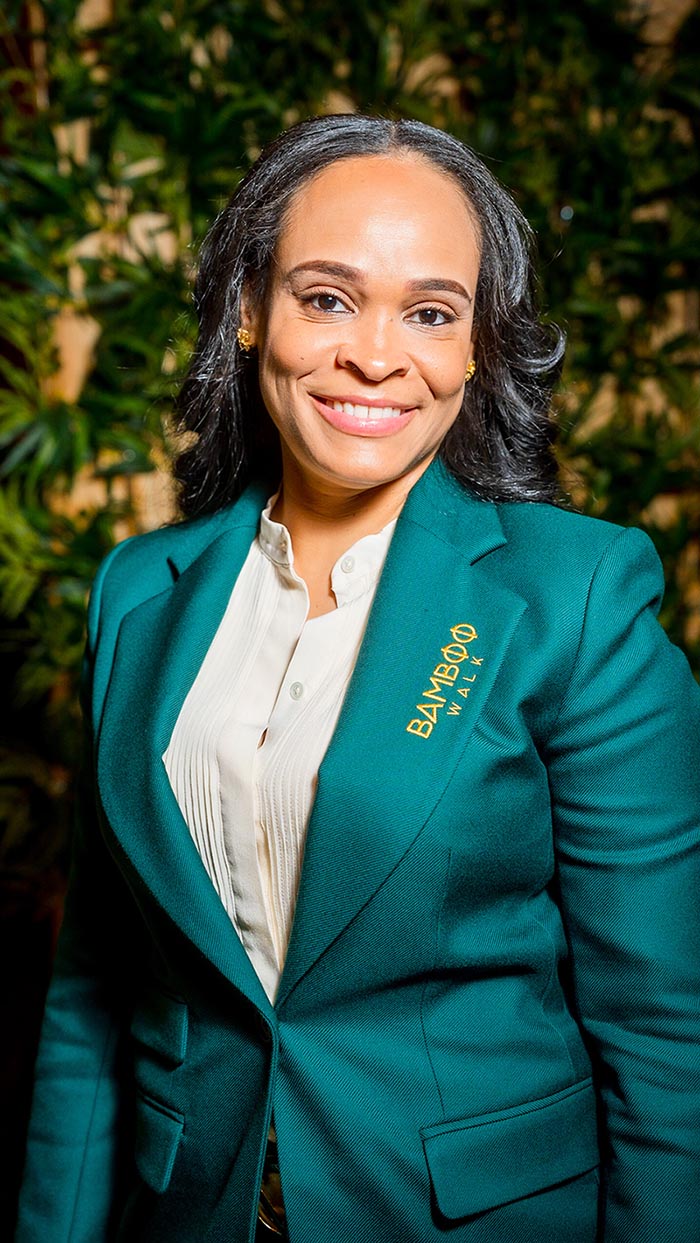 dress code:
Every Guest’s experience is very important to us. We respectfully request that all guests adhere to our dress code.
Semi-Formal. No hats | No Flip Flops

A true taste of the caribbean

Note: 20% Gratuity will be automatically charged 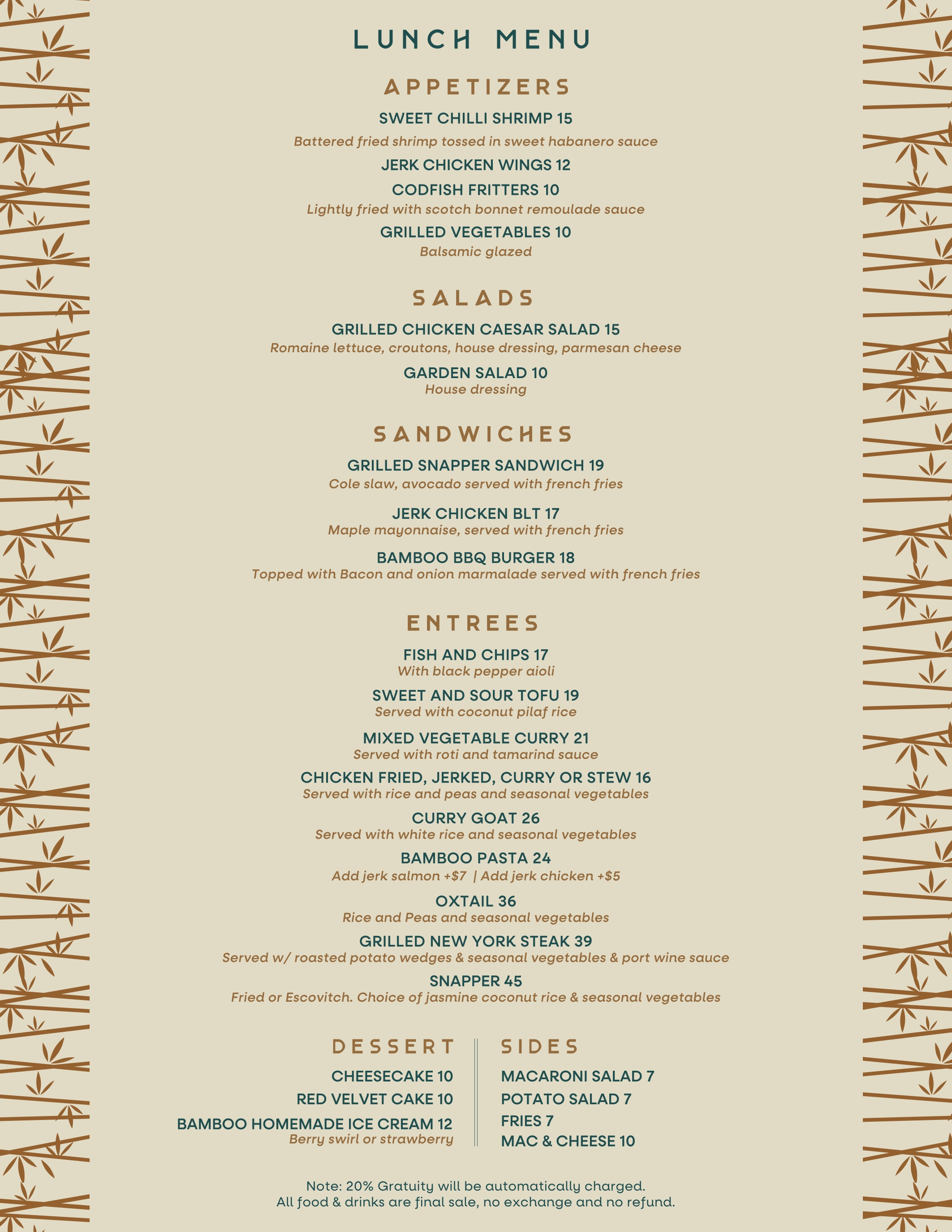 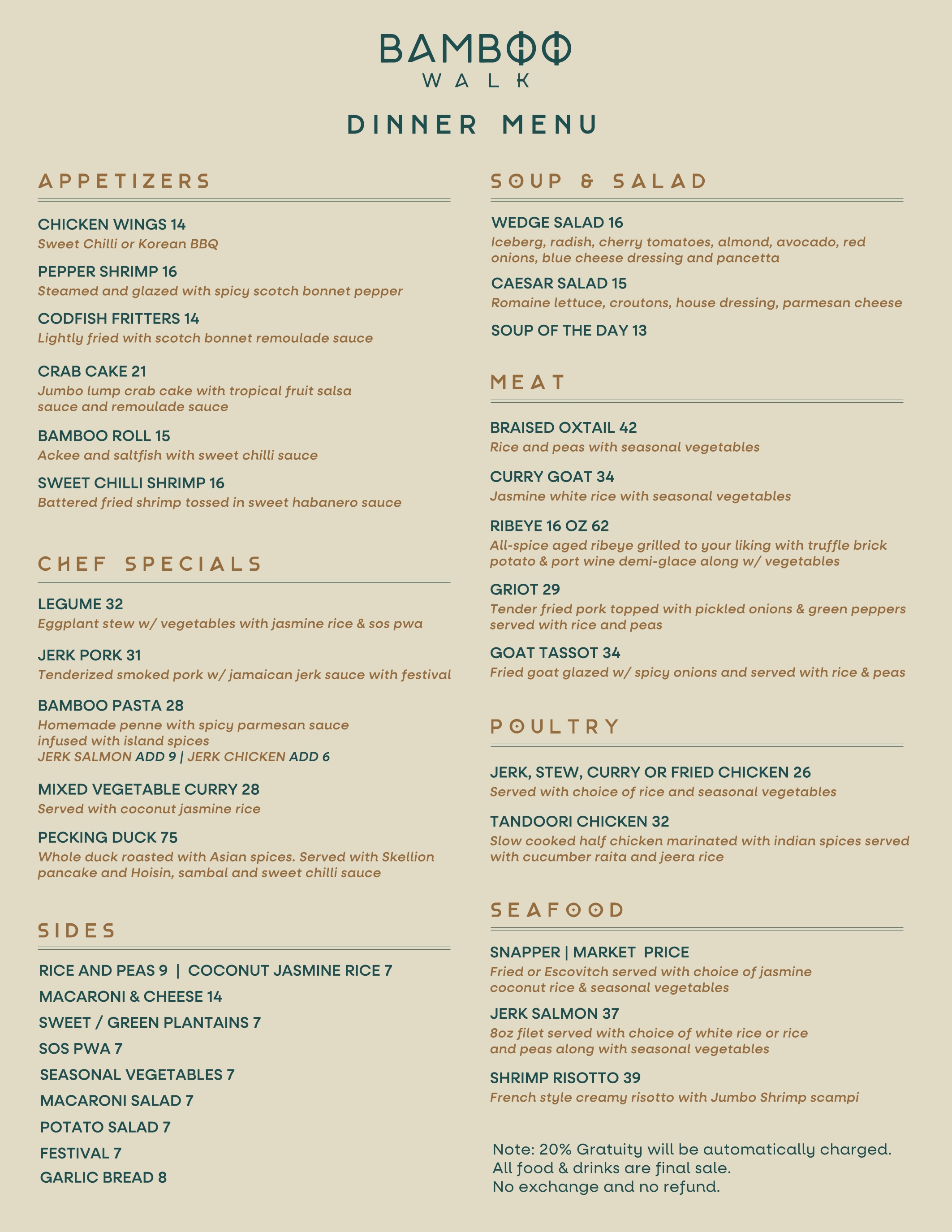 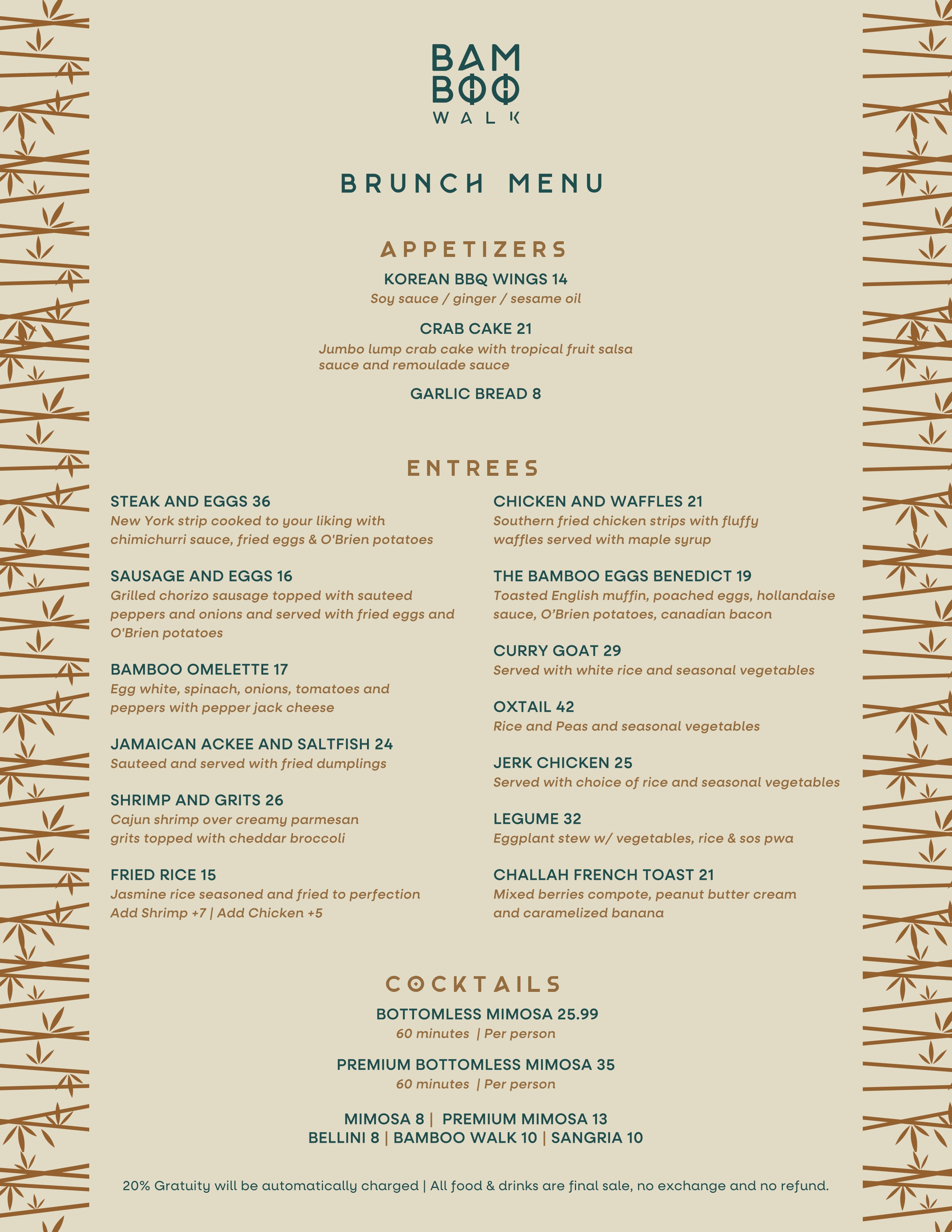 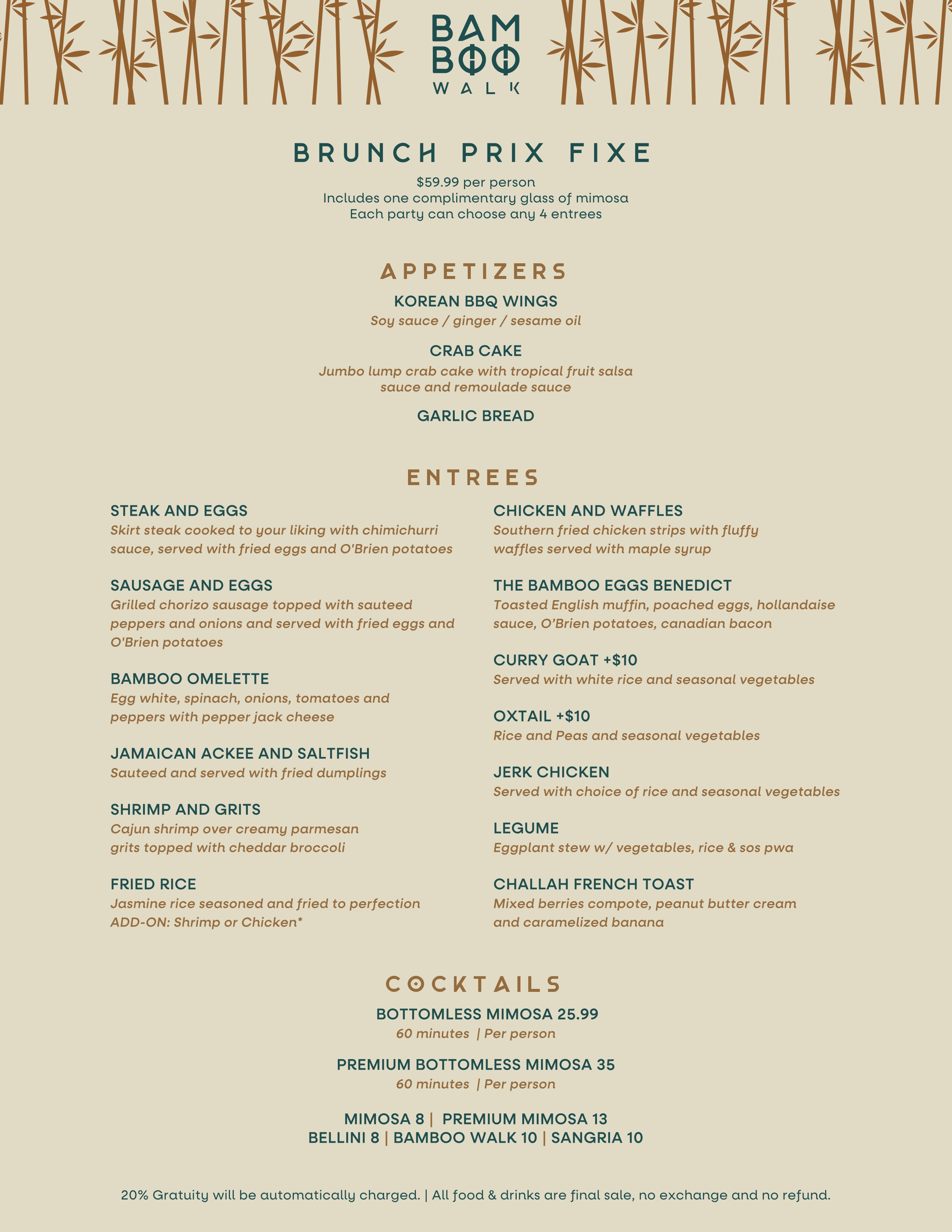 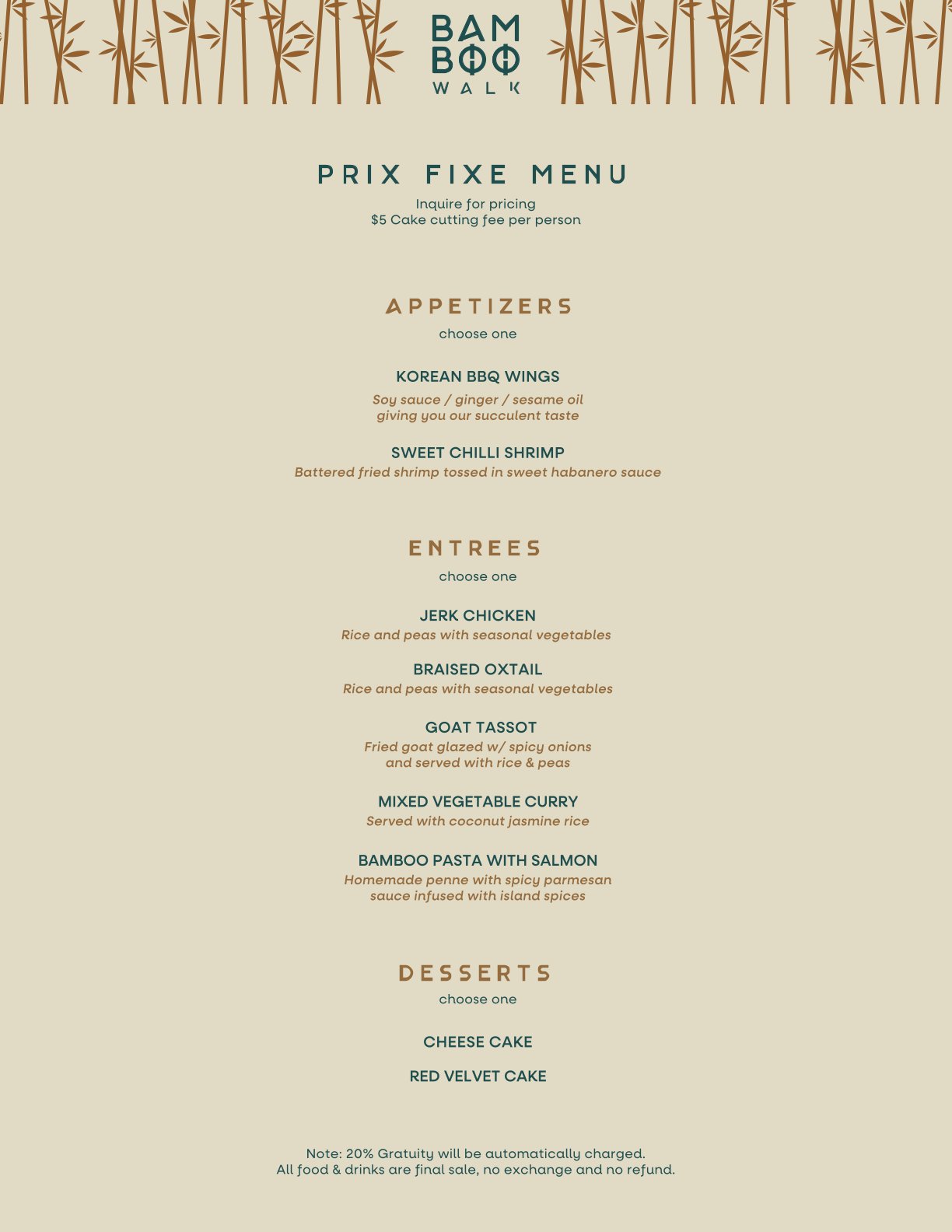 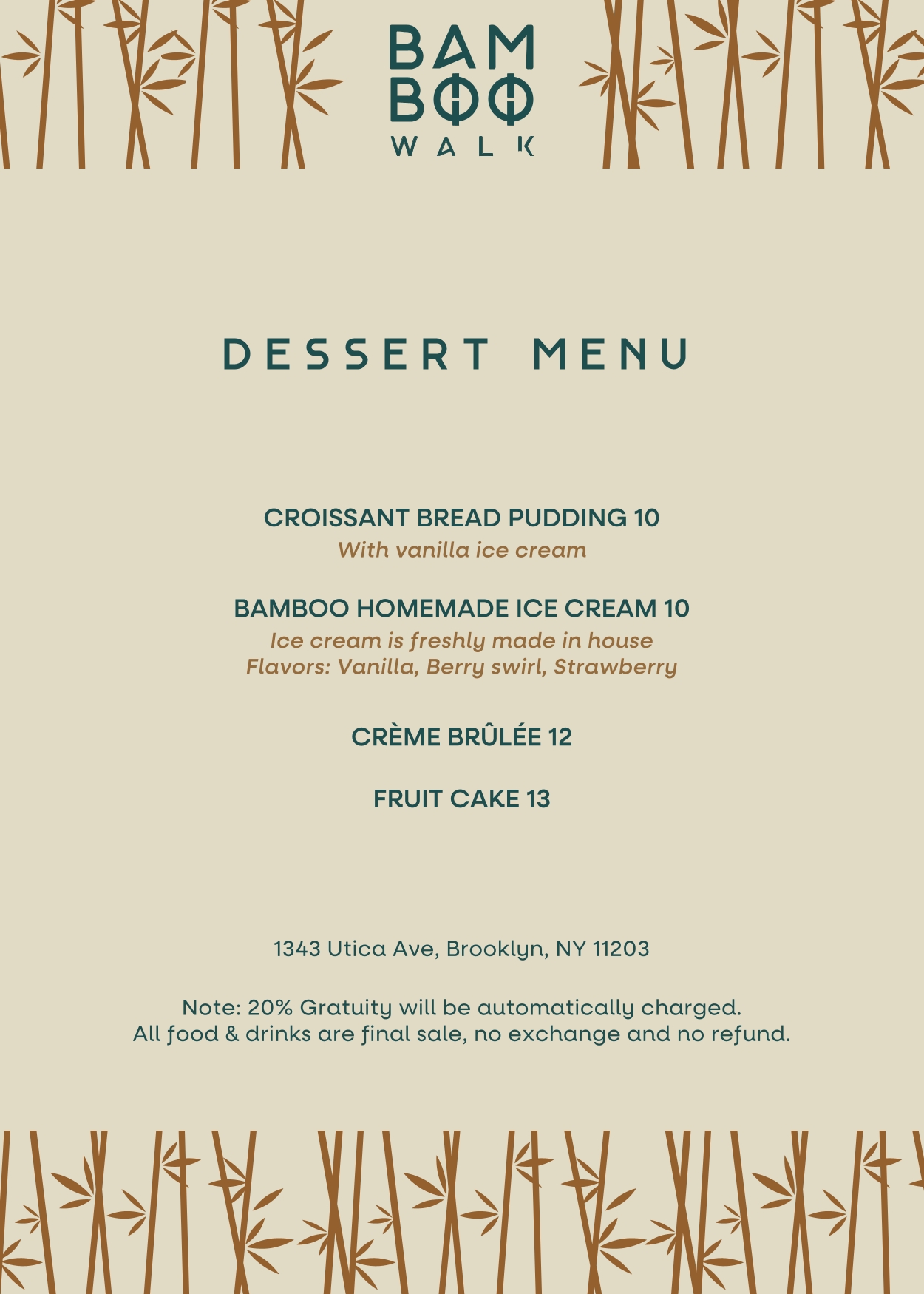 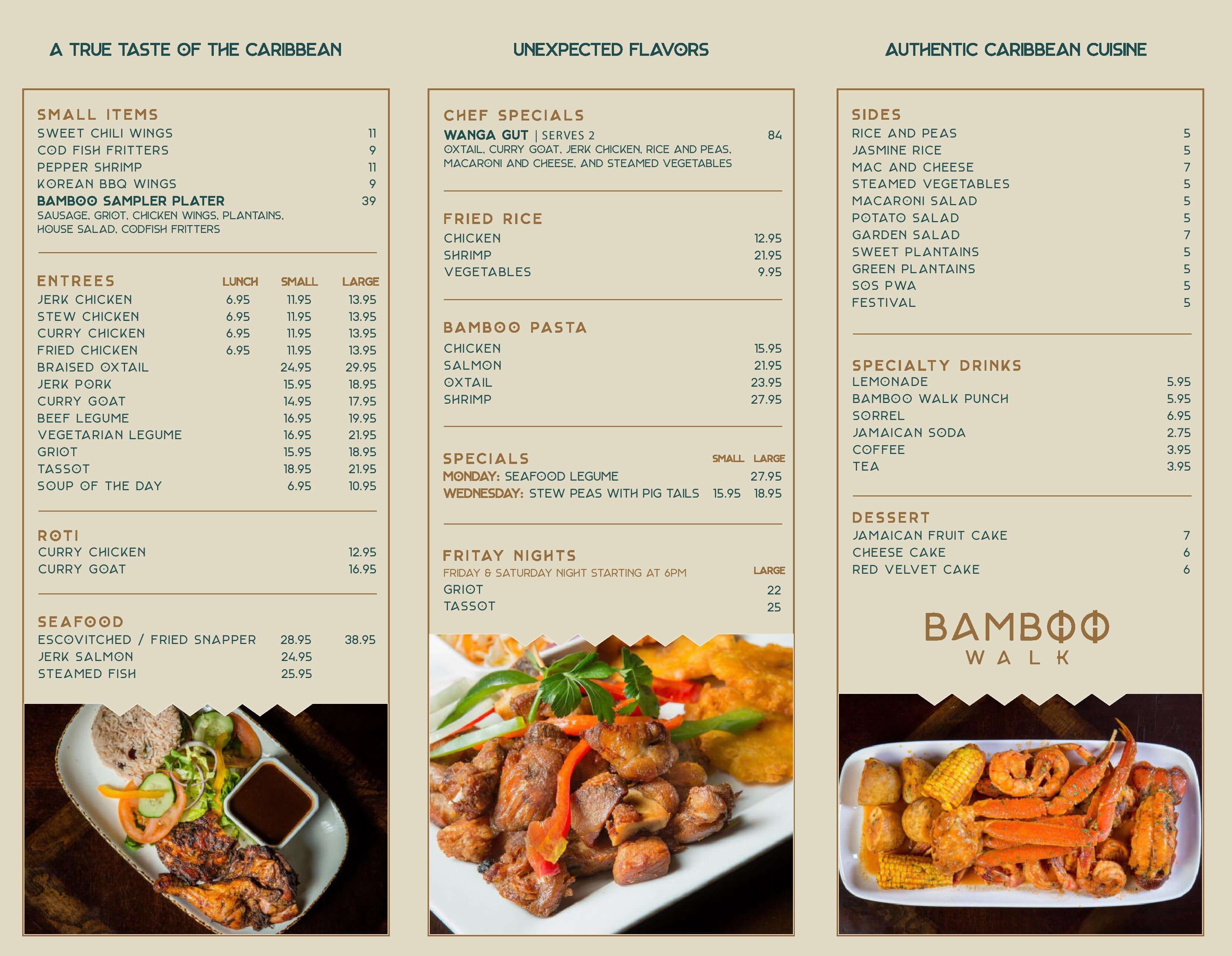 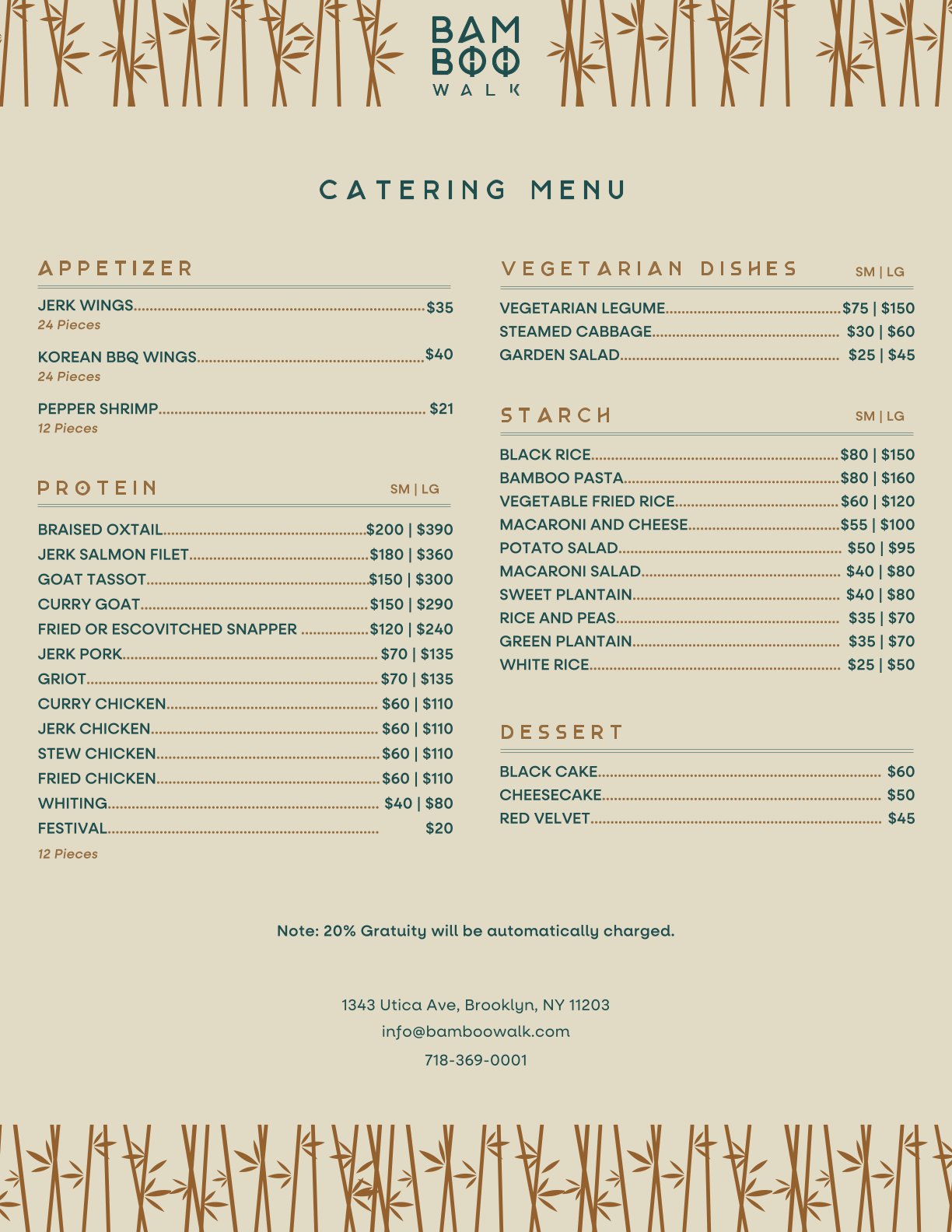 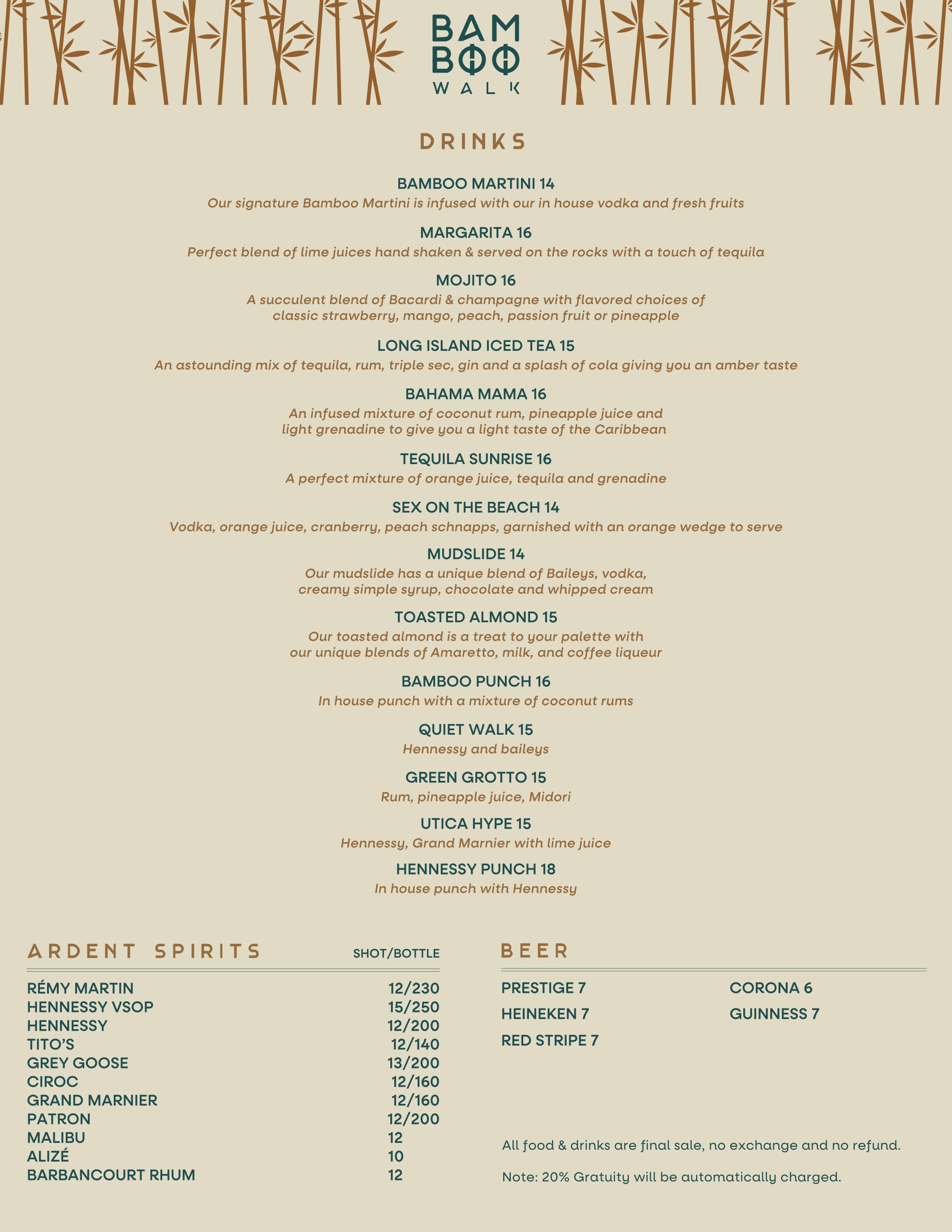 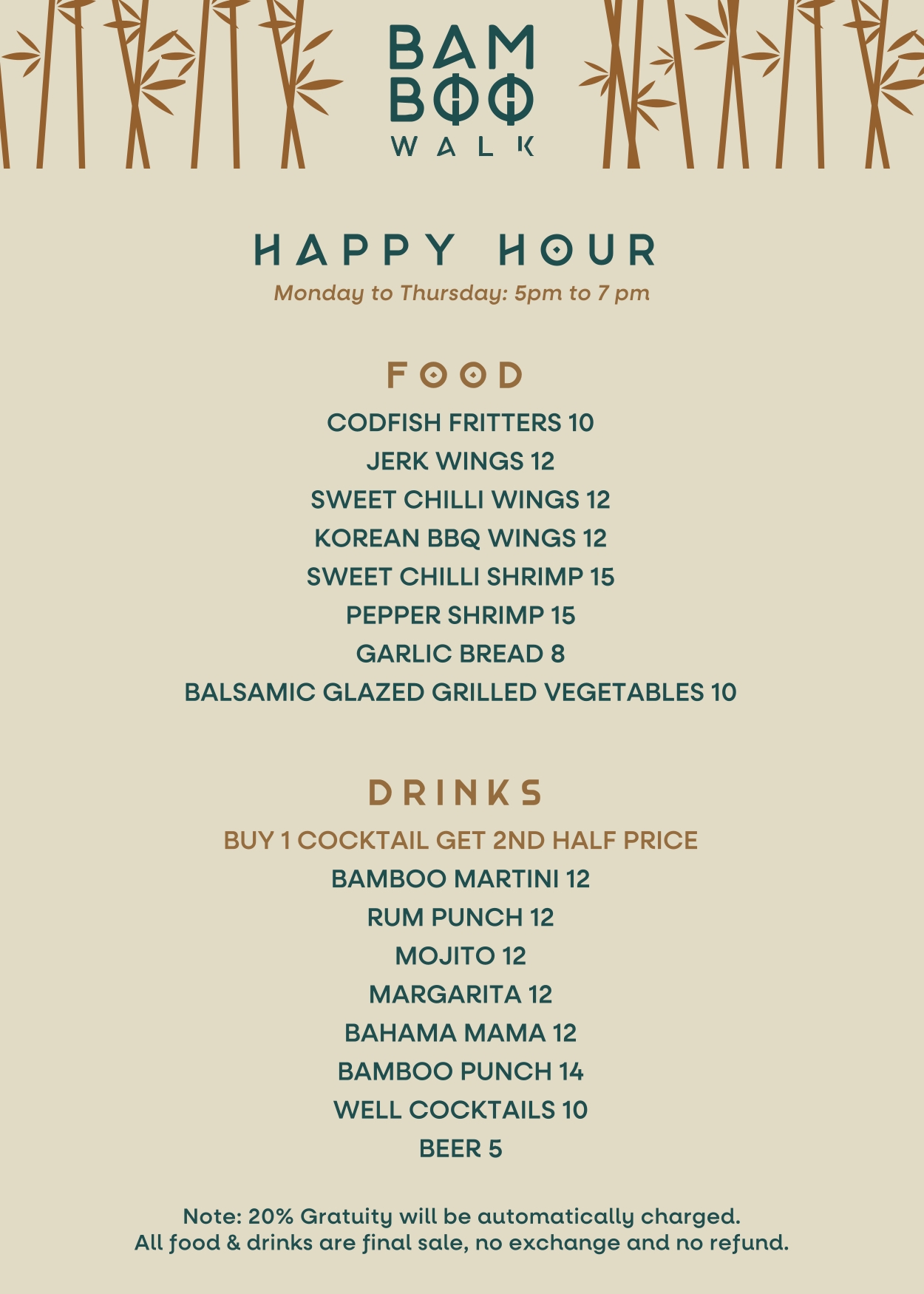 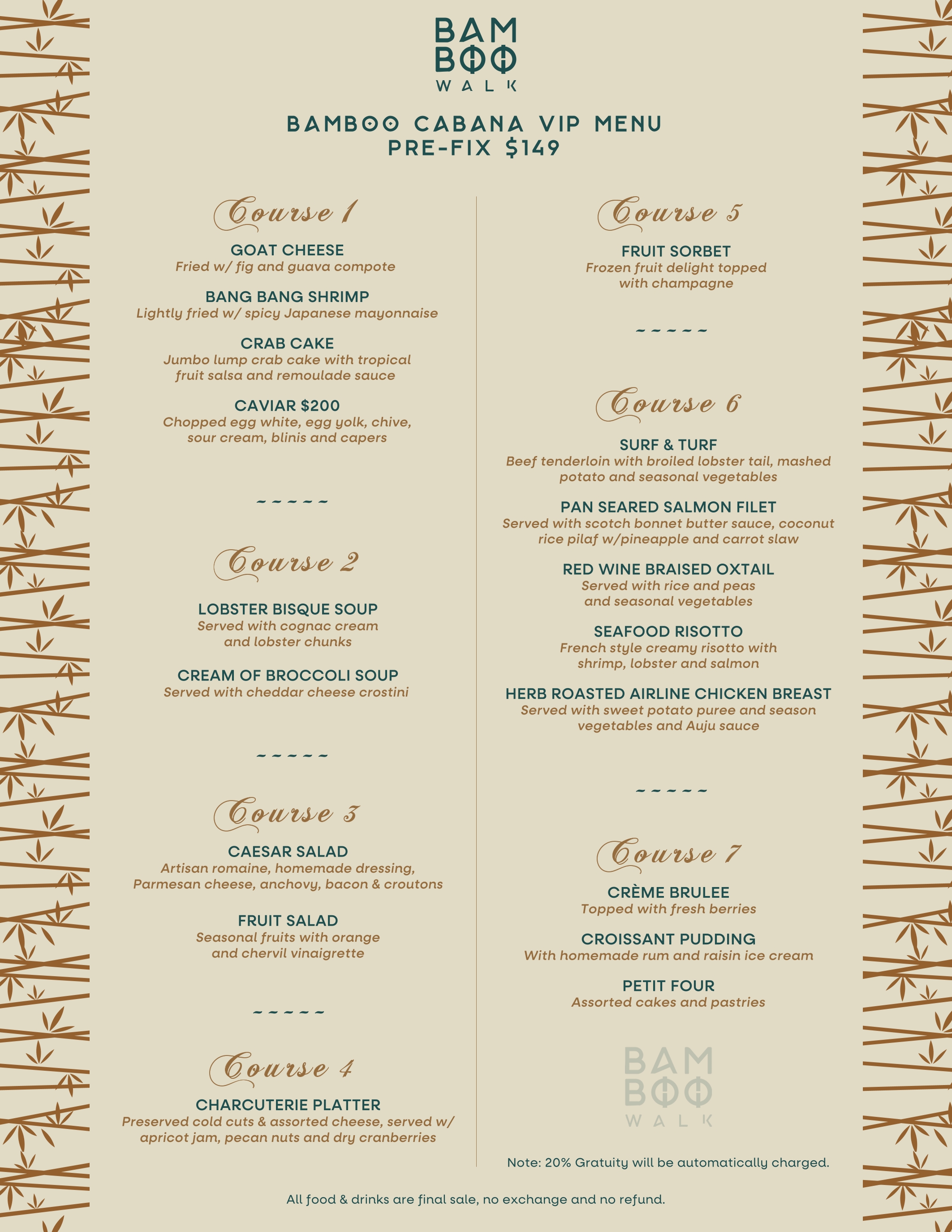 To make your reservation, please fill out the form and we'll get back to you shortly.

DRESS CODE:
Every Guest’s experience is very important to us.
We respectfully request that all guests adhere to our dress code.
Semi-Formal. No hats | No Flip Flops

We look forward to serving you.

My experience at Bamboo walk was an awesome one. The servers was so pleasant and efficient. The ambiance is really entertaining along with the music. The quality of food is exactly what this community longed for. The menu is detailed to perfection. Especially, if you order oxtail it  is tender and the rice is very good. The party that came with me really enjoyed their food as well. Bamboo Walk is “THE NEW HOT SPOT IN BROOKLYN” !!!!

I took my first trip of the year to celebrate my birthday and decided to live it up with a week in Brooklyn. Y’all ✨need✨ to visit BAMBOO WALK next time you’re there for the best oxtail ever!!

This is definitely 💯, staff were so friendly, courteous and accommodating. Food portions were more that enough 😋, the taste was excellent. Everything from the appetizers to dessert. The Ambiance of the restaurant is great for lunch with the girls, or a night out with your babe 😉 And the owner is such a warm and beautiful person, and it transcends to her staff. Thank you for a great dining!

The food and drinks were so amazing and the ambiance is unmatched. Very fair prices and I love the touch of live music. It was a great date night for me and my future hubby! I would definitely go back. My server Millie was very pleasant and helpful.

If you have any questions or want to get in touch,
don’t hesitate to send us a message.

Your information has been saved.